Track for your Japanese N-scale trains

Atlas is the best-known manufacturer of N-scale track in the USA. Atlas offers two ranges: a classic code 83 range and a recent and modern code 55 low-profile range, which is expanding rapidly. As far as I know, there are no great problems running Japanese trains on Atlas code 83 track, Kato once offered a very similar product. The range of code 83 track includes flextrack, numerous sectional track pieces, and points in two different radii. Crossings come in a number of varieties, including 45, 60 and 90 degree crossings. These are mainly aimed at the North American market, where railways of different companies often cross each other. Atlas offers a matching turntable and electrical components for this range of track.

This new track comes as flextrack and in an growing range of sectional track pieces. Turnouts come in two radii and are modelled after US practice, which is clearly visible at the sleepers (ties in US parlance), which have a 'staggered' appearance. When modelling Japanese railways, you should trim some sleepers to get the proper looks. No special turnouts (wye, single and double slips, 3-way) are available, but this may change in the future. I did some testing on Atlas code 55 track with a few Kato, Kawai and Tomix wagons. Kato and Kawai pass the points (frogs) with ease, the Tomix wagon hit the bottom of the frog and lifted a wheel for about 0.25 mm (10 thou), resulting in a slight risk of derailment. The track itself looks very fine and has a lot more sleepers per length ( cm, inch) as most other track, making it less suitable for Japanese prototype layouts. For US-prototype layouts it's almost perfect, but don't use old European rolling stock on it. 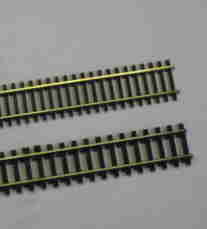 A new name in model railway track. Aspen Models offers very nice N-scale track that is laid on real wood sleepers, on which the rails are vulcanised. This track comes only as sectional track and is available in both code 55 and the even lower code 40. A wide variety of pointwork is available, including double-slips and 3-way points. This product is aimed at 'high-end' modellers and is rather expensive. The points should be used with a motor drive as the blades are made of a single piece of rail. Aspen Models' pointwork is available in both American and European appearance. The European (DB - Germany) and British versions come closest to the track used in Japan. Details like dummy point motors, ATC coils etc. should add the finishing touch. At the moment I have no information on compatibility with Japanese models, I expect no problems. Aspen Models also offers Nm (Nn3) narrow-gauge track, with a track gauge of 6.5 mm modelled after Swiss (RhB) or US (Colorado) practice.

Fleischmann from Germany offers a code 83 track system with a wide range of pointwork, flextrack and the unique rack rail. Fleischmann track has a shallow roadbed moulded on, which can easily be removed from the track, but not from the points. The points cause problems with Japanese models, the frogs are too deep, which can cause derailments. This track doesn't look bad, but is not recommended with Japanese N-scale models due to the poor pointwork.

A depot scene on a layout built with Fleischmann 'Piccolo' N-scale track. Appearance has improved over time, as this image is a scan from the 1971 catalogue (Image: Fleischmann)

A product from Japan that is becoming increasingly popular with American modellers. Kato is actively promoting this product in the USA and with success. Kato Unitrack is sectional track system (no flextrack available) with an integral roadbed. Point motors are concealed in the roadbed, eliminating the need to mount point motors under the table (which are hard to install and adjust). At the moment the only special turnouts available are a scissors crossover and a 15 degree and a 90 degree crossing. Kato Unitrack has a code 83 rail height and the track has simulated wooden sleepers. Kato Unitrack pieces are joined with special joiners, so-called 'Unijoiners', that come in both conductive and insulating varieties. An adapter track piece is available to join Unitrack with normal code 83 track, like Atlas code 83. A special product are the viaduct sections, on which the tracks are mounted on simulated concrete slabs, as is very common in Japan, in particular on high-speed and heavily used urban routes. New are the plate sections, sections of double-track with an area attached that can be scenicked with scatter etc. Kato even offers roads As this product comes from a Japanese manufacturer, there are no compatibility problems and I can recommend this track system.

Kato Unitrack in both N and HO scales

Micro Ace introduced its own track, called 'Georama rail' is a 'plate style' of track, the track is permanently attached to a plate with some depiction of scenery. The range is rather limited, there no turnouts available yet and you have the choice of only two curve radii. The straight sections are very long at 450mm, the scenic plate is on one side of the single track. There is also a section with a bridge and one with a small pond available. The curves have a 280mm radius for the 'small curve' and a 321mm radius for the 'large curve', the distance between track centres is 41mm, which is very wide for N-scale. A 90 degree crossing is also available, so can make a figure of eight if you want. Rail height is the usual code 83, connection of the sections look a bit like Tomix, but is not compatible straight from the box. The scenics are very basic, being just a sheet of coloured paper or plastic, with little detail. To achieve a better look, you should add more colour and texture with the usual landscaping materials. A nice add-on is the wireless controller. This controller consists of a transformer, a controller-receiver box and the handheld transmitter, 3 different channels are available. Of course this controller can be used with other makes of track and trains.

Again a product from Germany. The appearance of this track system becomes outdated. Minitrix has the classic code 83 rail, the points come in a 'tram-like' 24-degree, 192 mm radius and a more practical 15 degree 362 mm radius version. The points have a locking mechanism that is hidden below rail level, this calls for filling in the space between the sleepers, which results in an ugly unprototypical look. The frogs are a bit on the deep side for use with Japanese emodels, the curved turnouts and the double-slips may cause problems.

This product from England is widely used by UK modellers. Peco offers 3 different ranges of N-scale track, Setrack for table-top trainset style layouts, code 80 streamline and code 55 streamline for more serious modellers. Setrack is a sectional track sytem and has a toy-like appearance with steep (22 degrees) turnouts and only two curve radii available. Code 80 streamline is aimed at modellers who built a fixed or modular layout and has a selection of two different turnout radii, choice of wood or concrete sleepered flextrack. Special turnouts are the Y-turnout and 'trap points' which were widely used in the UK and elsewhere to protect mainline against runaway wagons parked on sidings. The trap point should be added to the siding and will derail any runaway wagon. Code 55 streamline has a low rail height, being about prototypical for the heaviest rail used today and again come is wood and concrete sleepered versions. 3 different turnout radii are available together with a wide range of special turnouts. Double and sinlge slips, Y-points and curved trunouts are available. All Peco point have a spring-lock mechanism and are best used with under-the table point motors. Some sectional track is offered in code 55, including a piece with a pit between the rails that can be used as an inpection pit or ashpit if you like steam locos. The appearance of Peco track is very suitable for a Japanese prototype layout and japanese models run fine on Peco track. Highly recommended for 'serious' layouts where both detail and performance are important.

This Japanese manufacturer has become the main supplier to Walthers for H0-scale track, but their N-scale track is less known. The range comes in both classsic code 83 and slightly lower code 70 rail height. Pointwork is a bit outdated when it comes to point blade detail when compared to Peco or Aspen Model, and the points have to be used with an under the table point motor. There's a wide selection of pointwork available including a 3-way and special 'ladder turnouts' for hidden staging stations. * Shinohara have ended their business, stocks will shrink and will eventually dry out. *

Tomix, the number one manufacurer in Japan has an extensive range of sectional track available and the range is still expanding. There's no flextrack, but there are plenty of sectional pieces available, including viaduct sections. Curved sections are available in 7 different radii, the widest 2 radii are only available as a double-track curved viaduct section. Turnouts are available in two different radii, the 541 mm radius is the most practical for serious modelling. Special turnouts are the curved turnouts, a scissors crossover and double slips. A Y-turnout has been intoduced shortly. Rail height is the classic code 83; Tomix track has an integral roadbed, which is about 1mm lower than Kato's. Point motors are again concealed in the roadbed. A nice touch are the detailing parts that come with the turnouts. There's no adapter track piece available, just because Tomix uses normal rail joiners. With some shimming you can easily join Tomix track with other makes like Atlas. Tomix also has a wide range of viaduct sections, but these are modelled after conventional concrete sleepered track instead of slab track as is the case with the viaduct sections offered by Kato. Details on track geometry, electrical connections and sample plans can be found here. Tomix track is highly recommended for both table-top and fixed layout applications.

This extensive range looks like the European counterpart of the US-made Atlas track. It looks as it comes from the same moulds, but most sectional lengths offered are different, as is the pointwork. Roco is an Austrian manufacturer who aimed first at the US market, before turning to the European market in the 1970's. Rail height is the common code 83, the track has wood grain and chair detail. Points come in 3 different sizes, the shortest 2 have the same geometry as those offerd by Minitrix, the larger one is more like the Atlas #6. All pointwork has a European sleeper pattern, and may be suitable for a Japanese outline layout. Roco has a wide choice of curved track sections, but stay away from the smallest radii, as these are again too tight for Japanese models (same radii as Minitrix). Point motors can either be screwed to the side of the turnout, or be an 'under table' point motor, completely hidden under the baseboard. Special turnouts without screw-holes are offered for use with these 'under table' point motors. The double-slip has two point motors, but has only the outer point blades fitted, which results in poor guidance for the wheels. This also applies to the double slips offered by Arnold, Fleischmann and Minitrix.This track is now available in the Fleischmann range, due to a merger between the Fleischmann and Roco companies. Roco has become the name for H0, whereas Fleischmann became their N-scale brand.

Most Japanese manufacturers offer a roadbed-type track, which is easy to work with. With a little extra effort you can make this type of track look very realistic.

< Back to modelling index